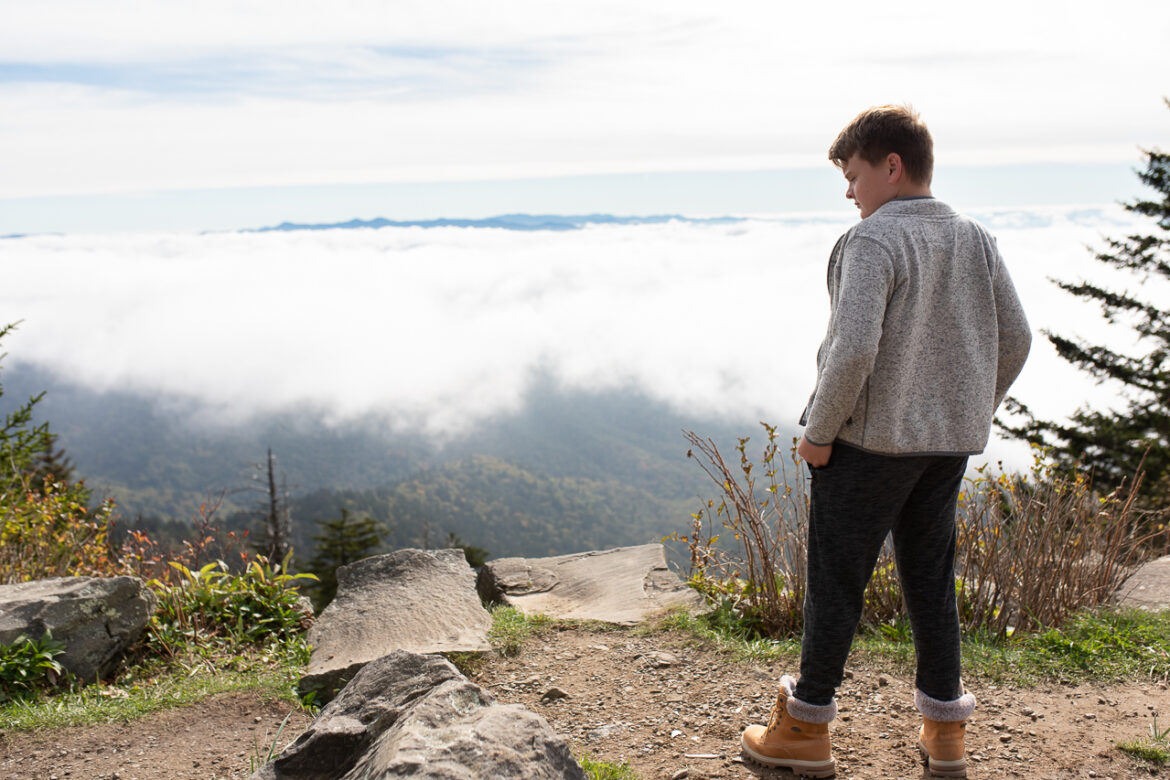 It’s bedtime in our camper at Greenbrier. We left yesterday around 4:00, drove til 12:15 am, got back on the road a little before 7:00 this morning, and arrived at Clingman’s Dome around 10.

We decided to go there when we were looking at our route yesterday and realized we were going to go right past it. Kelly had sent it to me last month and said a friend recently went there and it was really neat.

Well, it was really neat. But it was also really crowded on the trail, almost impossible to find a parking spot when we arrived (and completely impossible when we left 90 minutes later), extremely steep so it was a challenging hike despite being paved, and we stupidly didn’t bring any water.

Also, Leo fell off a log and smacked the side of his head on a log below it (thankfully a smooth part, other parts had protruding sharp branch nubs), kept running ahead ignoring our concern for his safety, refused to hold my hand, and stuck his upper body between the handrail and lower concrete wall trying to reach something off a treetop while on a ramp to the highest elevation point in Tennessee (so enormous drop) and smacked his forehead on the stone wall when I pulled him out.

BUT the views there were amazing, like unreal, the drive was magnificent, so beautiful, we had loads of fun playing games and listening to music on the ride (all the kids love to sing along with “Take Me Home, Country Road”, even Kjersti, it’s so cute, and can you get a better song for driving through these mountains? I don’t think so), and it was a super memorable day.

The road to Clingman’s Dome wound up and up the mountain to where we were literally above the clouds. You could look down at lookout points and see clouds everywhere. Leo noticed when we got out that there were other types of clouds still above us too, so that was neat to observe!

I love how driving through the mountains in Tennessee the roads have so often been made to mirror the path of existing rivers, so much of the drive you have water on either side. The rivers have so many rocks and the water rushes around them so beautifully. They remind me of Dunning Springs except they seem to go on forever. Watching them makes me wonder if the early pioneers or Native Americans were able to navigate them via canoe. I would imagine so, but it seems so challenging!

On the hike there were bare trees with beautiful red berry clusters on them (I wish I knew what they were called), purple wildflower concentrations, and trees with their leaves half changed to red, and half still in green. The higher up we went, the more fall colors we saw. It was an 80 degree day, but when we got out at the top of the mountain it was 57!

Landon wore Kjersti in our scout carrier for the hike and she slept almost the entire time. She looked so sweet.

There were huge rock formations at the base of the trail that our kids and a bunch of others were climbing Free Solo style. Leo was loving it, he had the most joyful smile on his face. That was the kids idea of a “hike”. I’m pretty sure they would have rather not bothered with the rest.

Yesterday we debated between the 0.5 mile paved hike we ended up doing and another option that was 1.8 miles unpaved to a bald mountain. Since I was the only one of our family who didn’t seem like they were going to pass out at some point on the trail, I think we made the right choice 😆 I definitely still want to visit a bald mountain someday though, they look so epic.

The absolute best part of the hike today though was the smell! I don’t think I’ve ever smelled cleaner, crisper air. And at some points up the trail you could smell the pine trees and it was just amazing! Like a Christmas tree candle but so pure and not fake. I wish I could bottle it up. It was incredible.

After the hike we were all so relieved to sit down, have water, and eat our lunches I’d packed the day before.

We drove through downtown Gatlinburg to get to our campground and it made me keep thinking “Dang! We’re in a tight spot!”, the roads are so narrow with cars parked on both sides and people everywhere. I quoted it once to Landon, but he’s never seen O Brother Where Art Thou, so the effect was lost on him.

Driving like that is so uncomfortable.  Landon got through it fine though. Last year I remember it made him very nervous, but I guess now he’s more comfortable driving this big thing, so this year it just made me nervous.

When we arrived at our campground the kids were so happy to see that our campsite backs up to the creek like last year, and that the water level is low enough that they could play in it! As soon as they got out of the RV they headed straight down to the water while Landon set everything up.

All four kids played in the creek for over an hour and had so much fun. They got soaked and filthy, but nobody cared. Kjersti got in slow, but eventually was sitting on her bottom in the freezing running water, and she loved it. She learned how to throw rocks in too thought that was a great time. Kaden brought his army figures down to the bank and built bridges with sticks and dams and fortresses out of stone. Alia found small sharp rocks she used to write on large flat rocks, and said it was like her LED tablet except erases with water. She and Leo set up some kind of rock store they were trading with each other at too.

I sat on a fallen tree near the edge and took photos and kept a close eye on Kjersti. She would come sit by me every so often for just a bit, and then go back to throwing rocks and playing. She was also giving kisses to everything, rocks, fallen leaves, me.

There was a little breeze and every time you looked you could see scattered golden leaves fluttering down from the canopy of trees lining the river, like sun-kissed snowflakes.

After an hour or so Leo and Kjersti wanted to checkout the playground across the way, so we cleaned up and did that.

Landon grilled burgers on the campfire for supper, and we did showers before bedtime. Leo was out in 1 minute flat. We are all so tired.

I can’t believe we’re here again after visiting our first time less than a year ago, but we’re very happy and grateful to do so ☺️