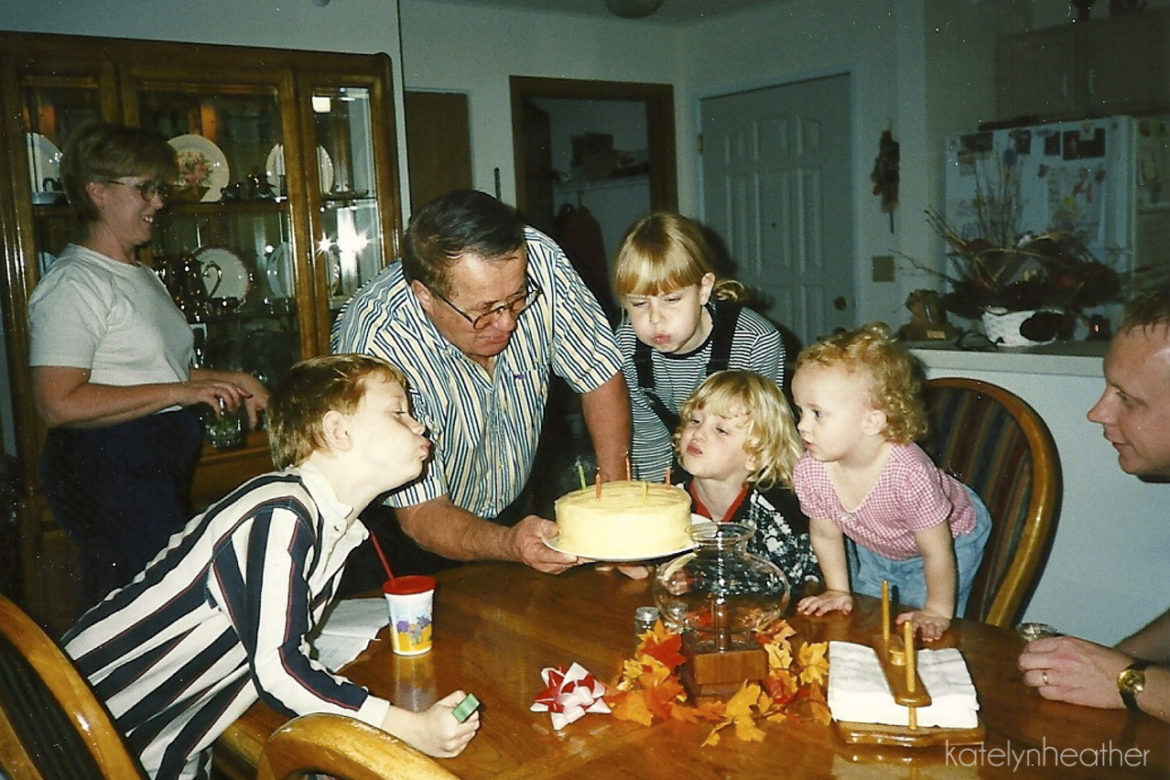 I think that as his grandchild, I got to know the very best side of my grandpa. He was a wonderful grandfather. 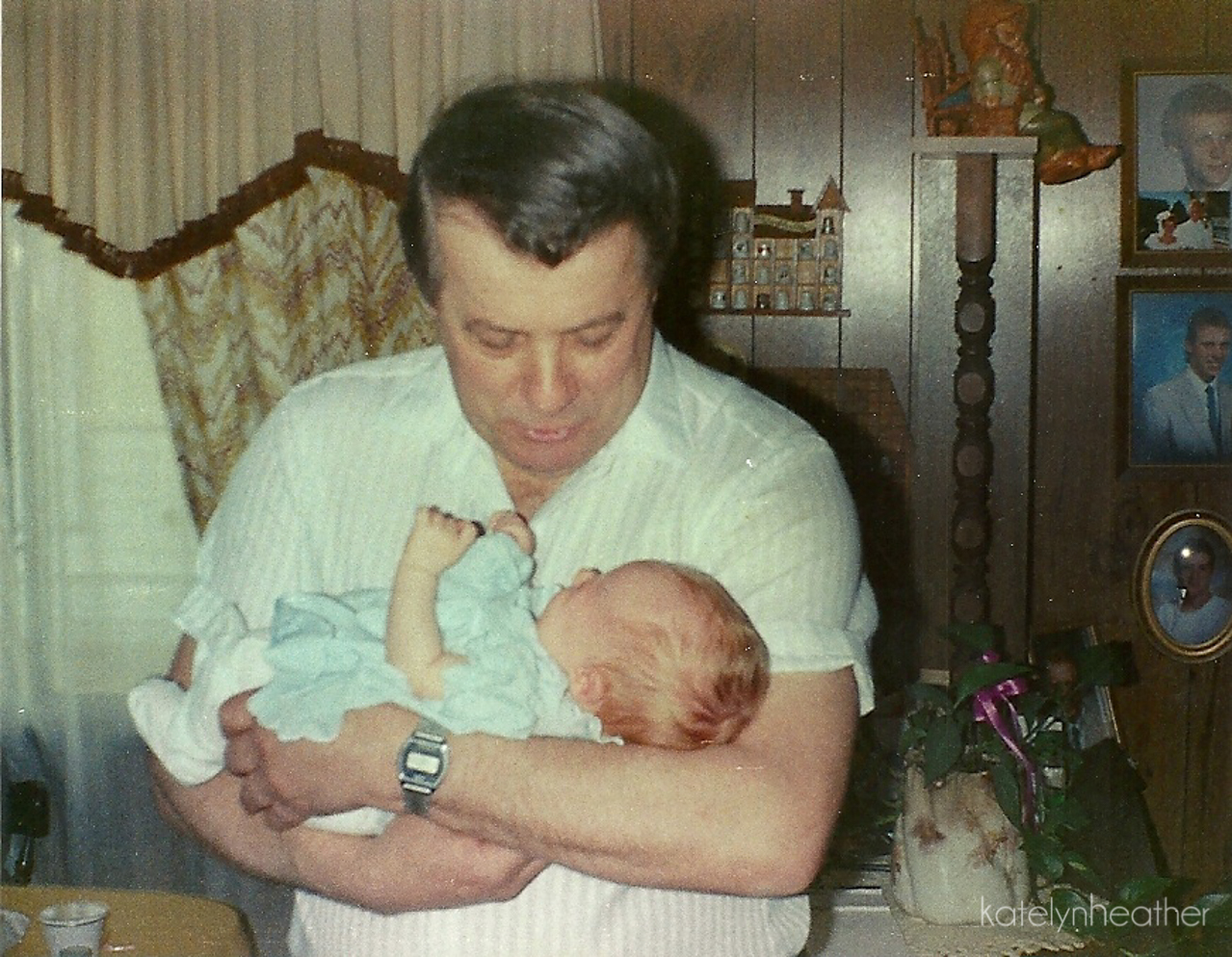 He was always happy to see us. Always had something fun for us to do, whether a tractor ride around the property, a trip to the malt shop, a new toy, and always candy. 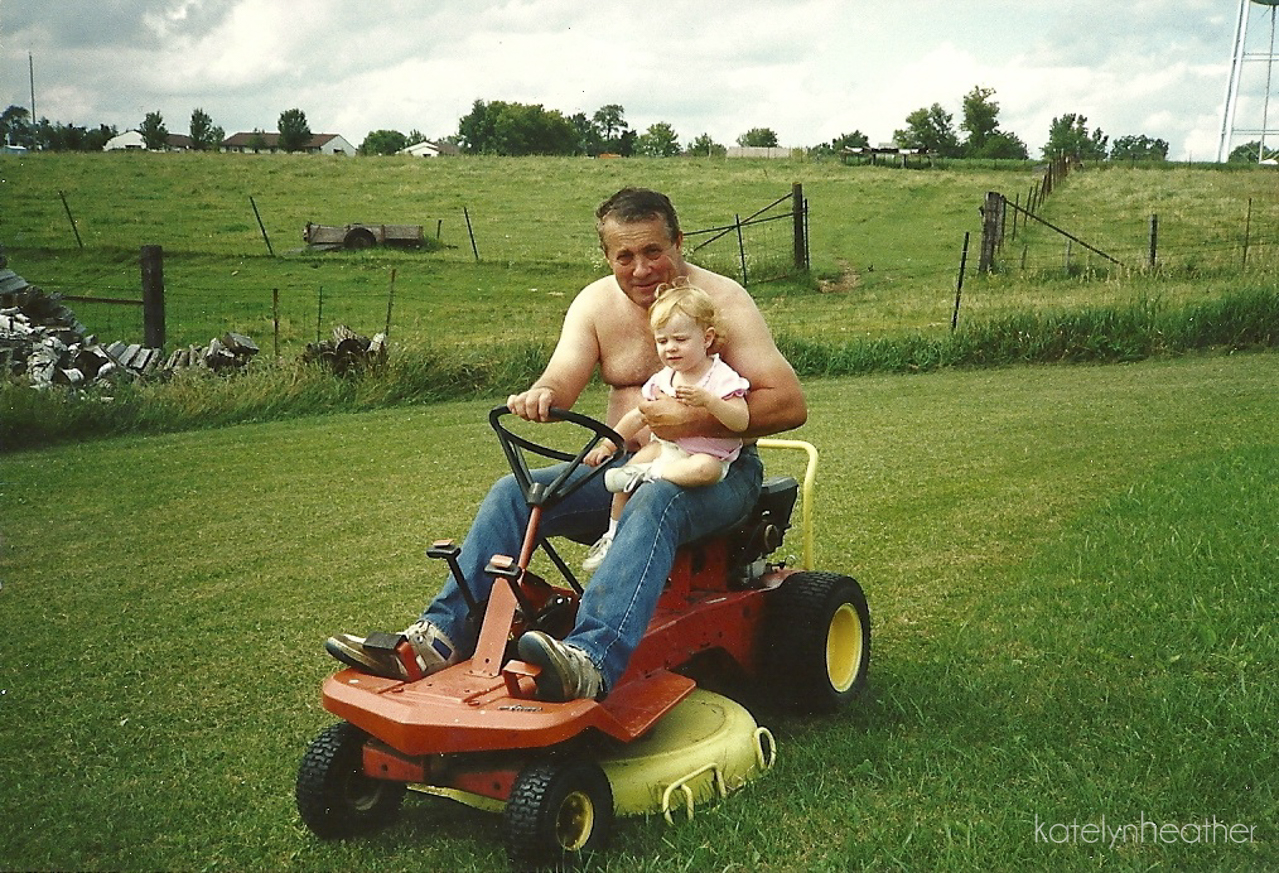 He had a unique sense of humor that found enjoyment in wrapping us kids Christmas gifts like rings of salami, goober peanut butter & jelly, duct tape… you never knew what you were going to open from Grandpa.

I’ll always remember walking through the parking garage of the retirement center he and my grandma managed and spotting his signature drawing on the back of especially dirty car windows (it was a monkey smoking a cigarette. Where he came up with that, I do not know.) 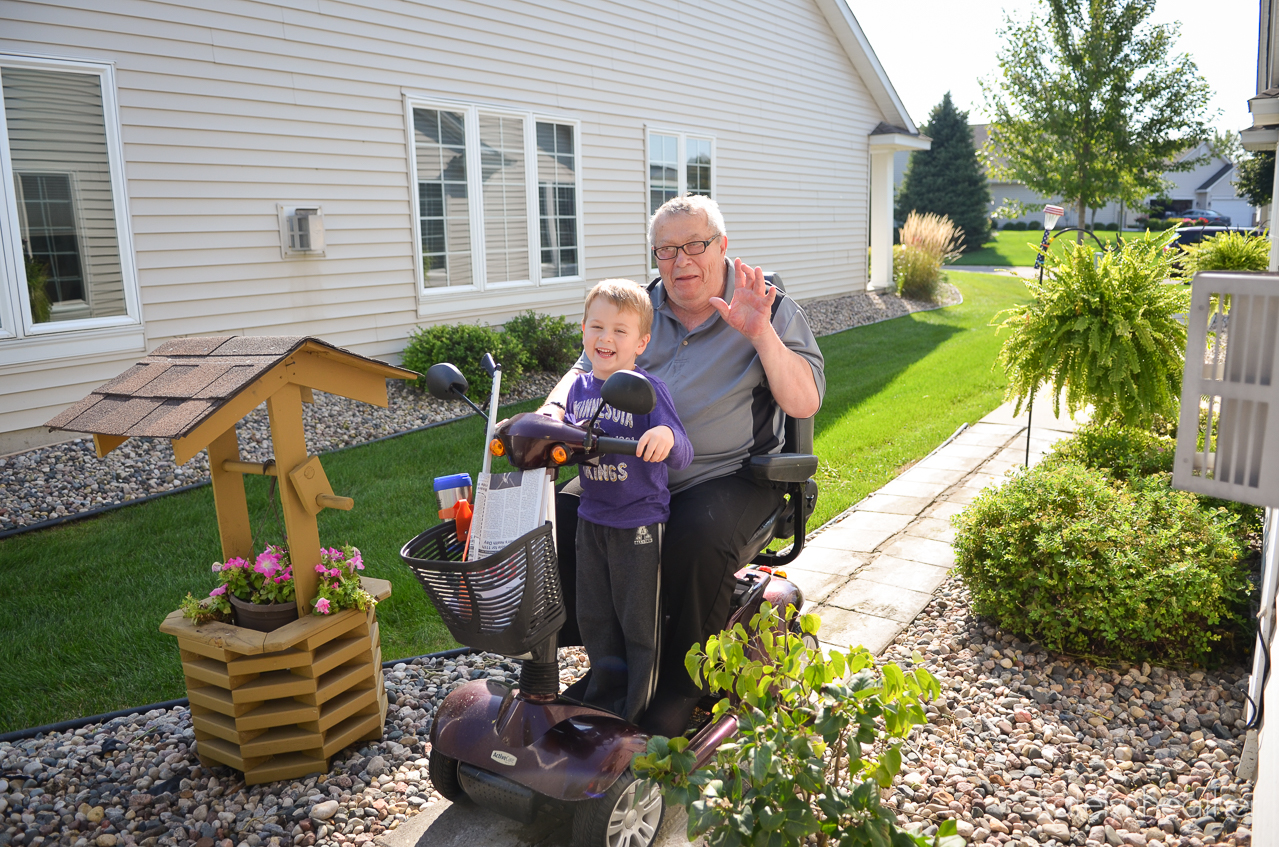 I’ll always think of him when I see John Deere tractors & fire trucks. He grew up on a farm, and spent 25 years as a volunteer firefighter. He enjoyed decorating his spaces with a model collection of both. 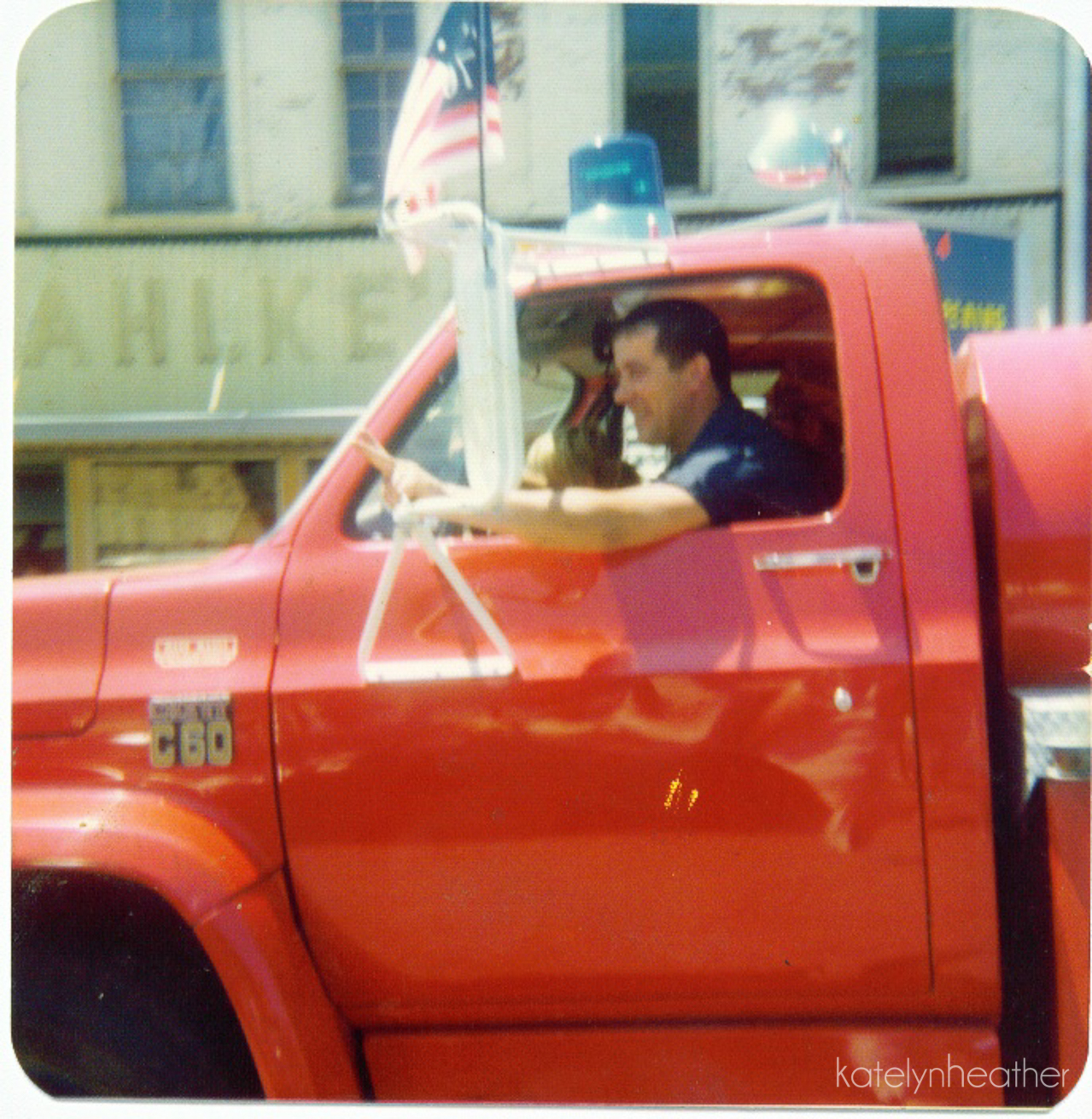 One thing Grandpa did not like was to be bored, and when he was you can be sure he found ways to keep things interesting by getting into trouble. Once he was living at the nursing home there was always something to hear about what his latest escapade had been. 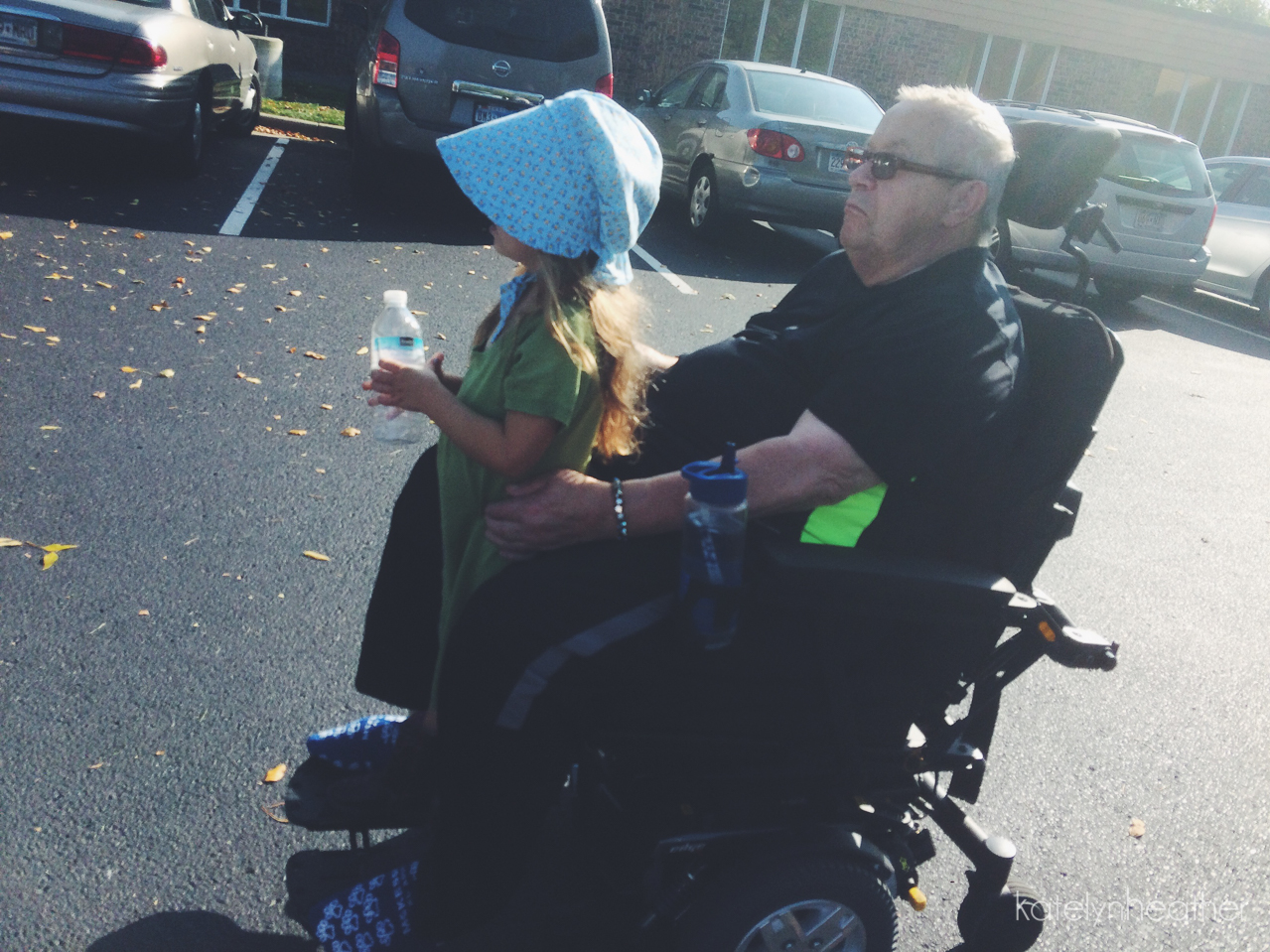 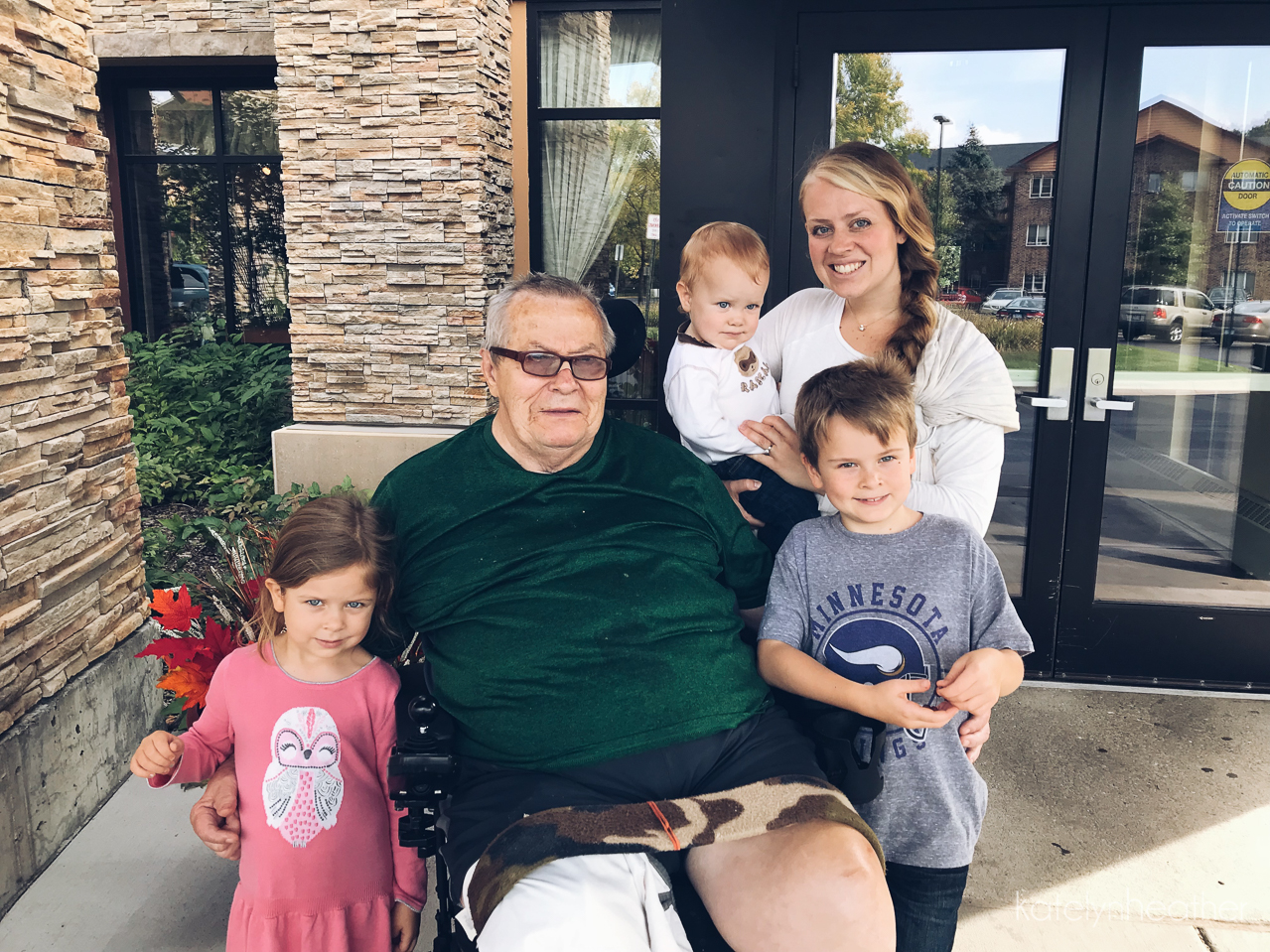 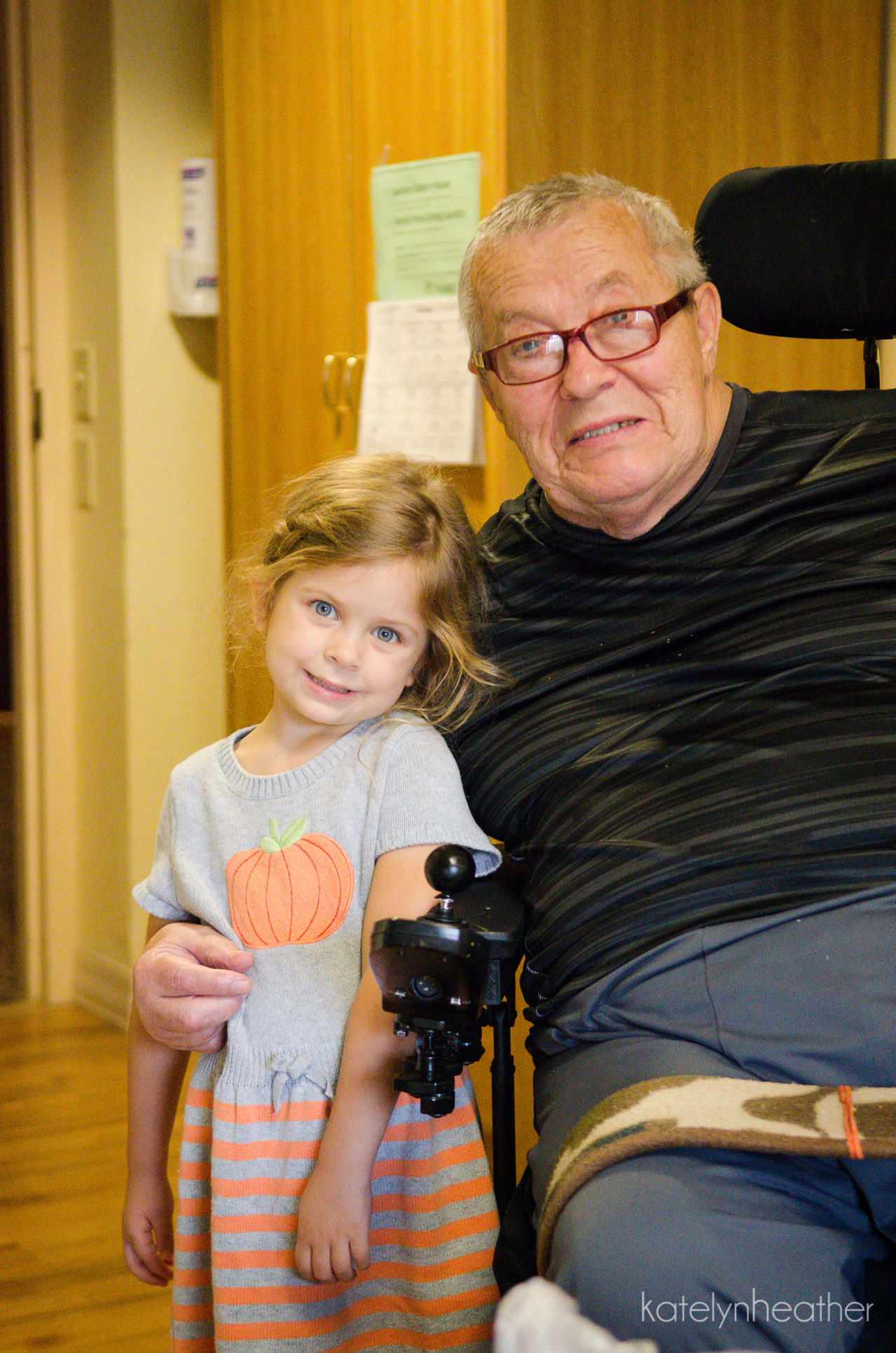 I’ve always loved seeing photos of him as a little boy. For one he is adorable (I especially love the photo of him with his twin brother, they are so cute! I remember the first time he showed it to me, I was around 8 and I don’t think I knew he had a twin prior to that. He asked if I could tell which one was him, and I said yes! The one with the pouty face.) 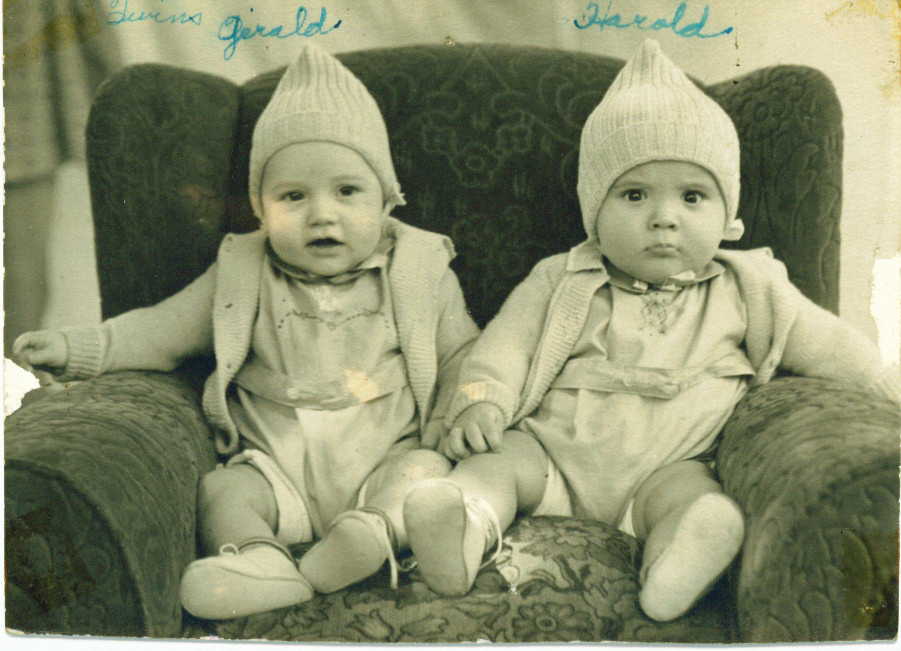 I think his childish spirit of fun and mischief, for better and for worse, stayed with him all his life. 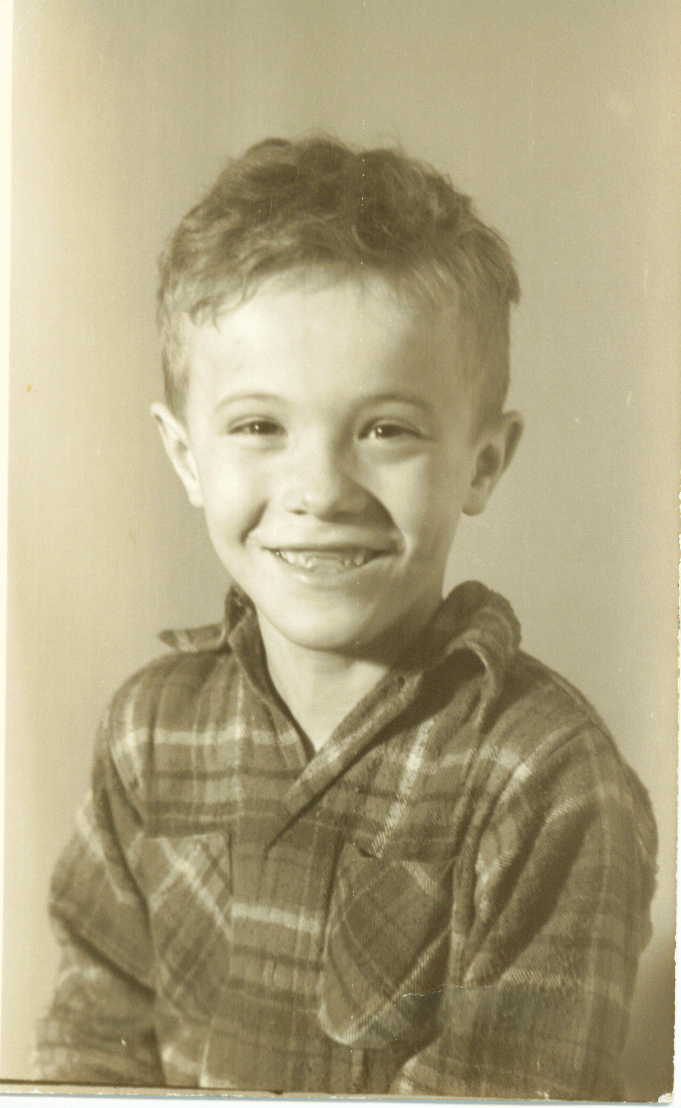 Sometimes I think about how if I could go back in time, I’d like to go and be a nanny for his mother’s children. She had 12, I think Mary Poppins could have helped them out. 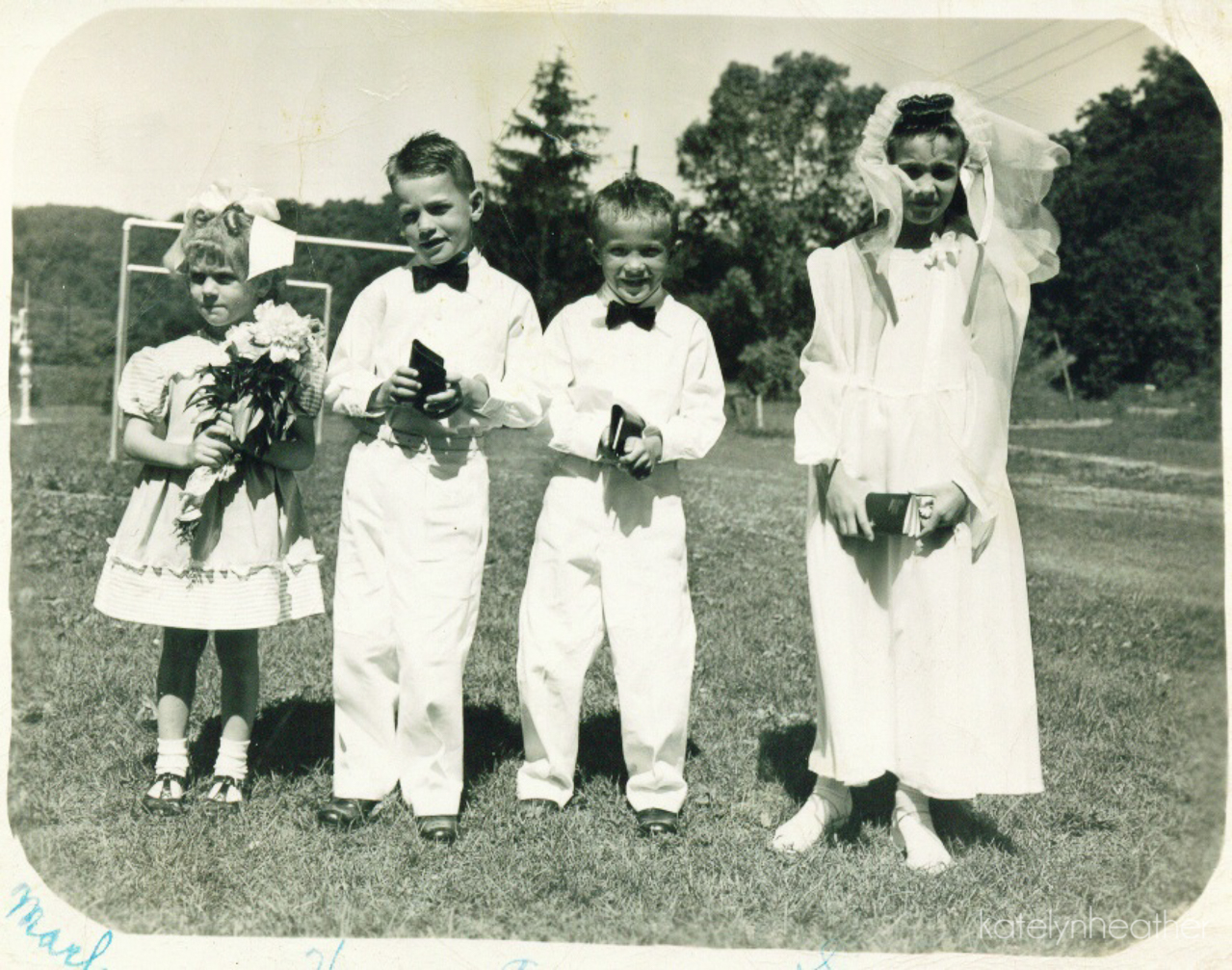 He always loved being read to, and would tell me about how some of his favorite memories were from his first year as a newlywed when he and my grandma lived in an old farm house with no heat or indoor plumbing (he called it “the winter at Valley Forge”). When they got home after work they’d get straight into bed, because it at least had an electric blanket. He brought home books he had enjoyed at school, and my grandma would read to him. Little House in the Big Woods & others by Laura Ingalls Wilder were some of his favorites, as well as classic nursery rhymes, which he was always quoting to my kids when we would FaceTime him.

A couple of years ago I was sitting with him in the den at their house, with Alia playing on the floor and the television on, when the topic of heaven came up. I asked him, “do you think you’ll go to heaven?” He answered “oh I dunno, I hope so.” I think he may have wondered if his life had been “good” enough to make it there. I shared with him what it says in Romans 10:9

If you declare with your mouth, “Jesus is Lord,” and believe in your heart that God raised him from the dead, you will be saved. 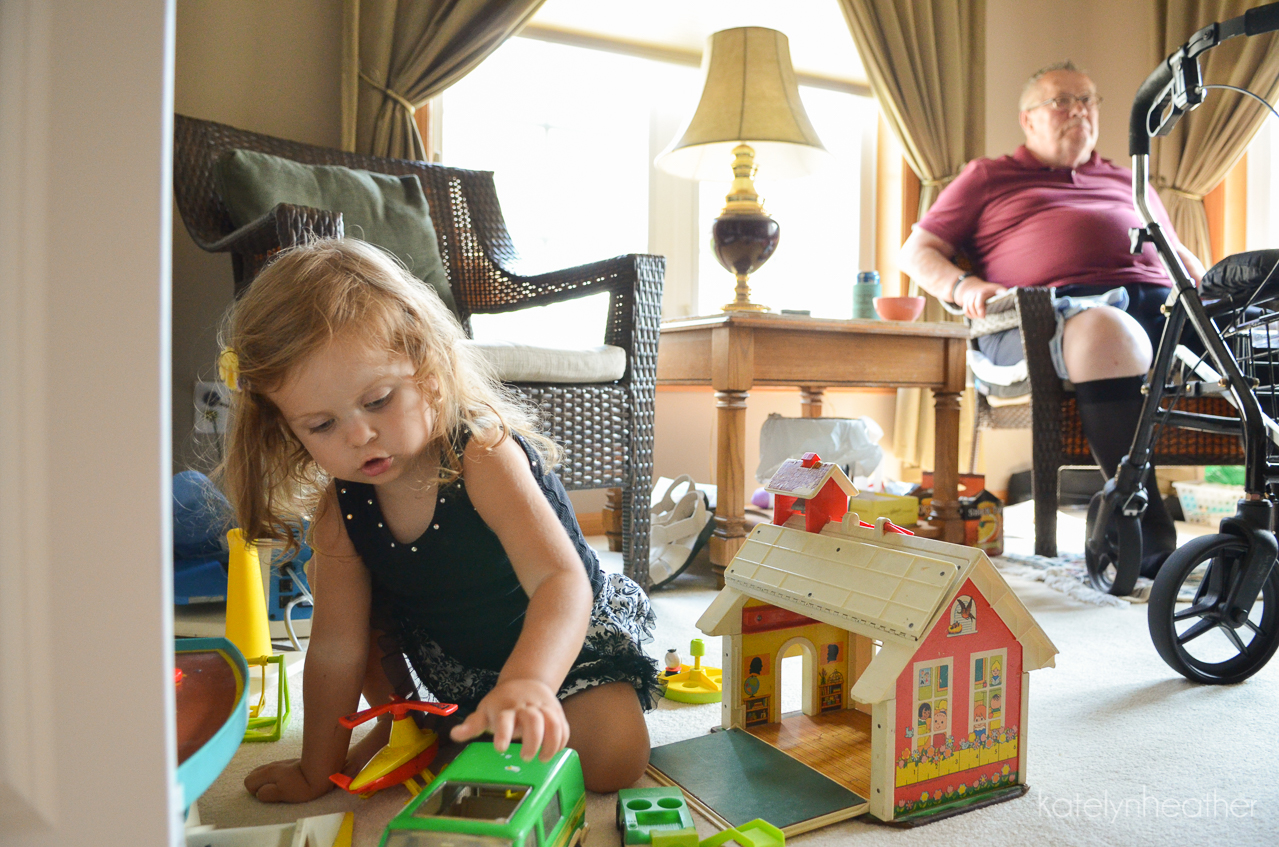 I told him it’s not complicated (and no one has been “good enough”.) The only thing that can get us there is asking Jesus to save us. I asked him if he’d ever done that, and he said he had.

So while I miss him on earth, miss his FaceTime calls, his holiday cards, hearing his voice and seeing his face, I look forward to the day we’re together in heaven, and I imagine with gladness the joy he’s experiencing there now.

Where his body is new and in its prime, where there is no sorrow or sadness or sickness. Where he’s meeting up with friends, old and new, and I hope maybe even his faithful dog Fritzie was there to greet him.

I don’t know all the wonders heaven holds, but I do know the Lord who made it all, and rest in His care, for

No eye has seen, no ear has heard,

and no mind has imagined

what God has prepared

for those who love Him.