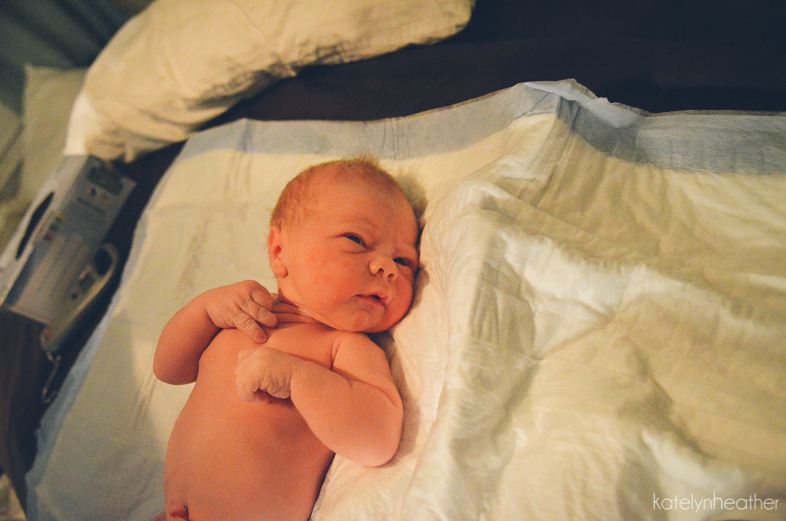 I was 40 weeks pregnant on Monday, May 16. That morning I had a chiropractor appointment and used the gift certificate our church gave out on Mother’s Day for a 30 minute massage. The massage therapist said she could work on some points in my feet that induce labor, if I was ready to have the baby today. At first I thought yikes, I don’t know if I’m really ready today, but then decided that what the heck, I’m as ready as I’ll ever be, so told her sure, go ahead and do that. 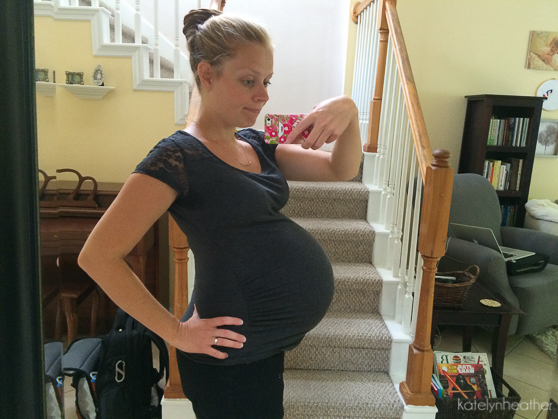 When I got home I spent the afternoon in the kitchen making the last 2 freezer meals I wanted done before the baby came (a braided turkey & cheese sandwich and homemade veggie burgers), and noticed that I was having some contractions. They continued the rest of the day (we did a quick run to Target that evening for a few essentials) and through the night, and were strong enough that I woke up about once an hour from them. 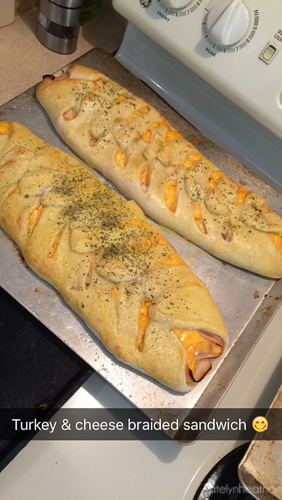 Tuesday morning Alia and I went to a friend’s birthday party. The other moms asked about baby and how I was feeling. One friend told me she had a water birth tub if I’d like to use it. She said it was just in her closet deflated & she could drop it by later. I wasn’t sure if I would use it or not, but I’m SO glad now that she offered.

We went home for the day after the party was over around noon. Since I’d been having contractions for about 24 hours at that point I thought or hoped that they would pick up sometime that day & we’d get to the active labor part. But the rest of the day I still had a couple contractions an hour, all through that night as well. They were increasing in intensity but not frequency. I rubbed and squeezed my back during them, because I was having a lot of back labor. I prayed a lot too, alternating between God help me, I don’t know if I can really do this and God thank You so much for this baby. Thank You for letting us have this experience.

Wednesday I continued having 60 second contractions about 20 minutes apart all day long while resting, and closer together (like 10 minutes) when I was up and moving around. I was kind of feeling frustrated at this point, just wondering when is this going to turn into the real thing? Plus I was tired from not sleeping well 2 nights in a row, and the contractions were at an intensity that I couldn’t function to do anything else (they really hurt! Especially in my back), so I just laid around all day having contractions & wondering when this baby was coming.

By evening I felt mentally and physically exhausted, so I called my midwife, Charlie, to ask for suggestions. She said prodromal labor is more common the more babies that you have, but that sometimes the contractions are trying to turn the baby if they’re not in an optimal position for birth. She suggestion that I get adjusted by a chiropractor as soon as possible, and to do forward leaning inversions.

I called my chiropractor’s office, which was closed for the evening and the next day, but thankfully got ahold of the dr who lives nearby and said I could come by their house right away to get adjusted. My mom picked me up a little before 7 pm & drove me over there, he adjusted my hips, & we went back home.

Landon had made dinner so we ate when I got back (steak & mashed potatoes). During dinner we both noticed the contractions were coming closer together, like 7-8 minutes apart. I thought maybe it was just because I’d been up & moving so much, & that they might slow down again if I lay down.

I went upstairs to get ready for bed & try to relax in the bathtub, which would have been nice except our bathtub is so shallow it was pretty much worthless. I was cold and tired, so I just got myself and the kids ready for bed. Contractions were still coming pretty frequently, and were very intense. I started shaking around then and couldn’t stop.

I called my midwife again to tell her what was going on, and she said it sounded like baby was coming and that she would head our way now (she lives about an hour from our house.) We called my mom to have her come over as well.

I was feeling miserable at this point, so I asked Landon to fill up the water birth tub. He set it up in the bathroom next to the shower, so the shower hose could reach and fill it. We also had the electric tea kettle upstairs, to make more hot water to get the tub to a good (hot!) temperature.

Landon took Kaden & Alia to the kids room to go to bed, but Alia fell on the way and was crying and overtired and very sad and just wanted mommy so I told him to let her come lay with me. She snuggled up to me in the bed and we laid together while she fell asleep. I was still shaking and still having very strong contractions. When I looked at Alia I would stop shaking for a little bit – it was like I couldn’t stop for myself, but looking at her and thinking about how much I love her and how I want her to be able to sleep peacefully, I could stop shaking for a little bit for her. I also thought about the way I know that I love her, and how I know that God my Father loves me even more than I love my own children, and how He was with me and I’d be okay.

Once she was asleep Landon moved her to the kids room, I threw up my dinner, and then got in the tub (around 10:45 pm) – I felt SO much better in there I can’t even describe it. Before getting in the water it was like my whole body was on edge constantly – during contractions, in between – I could not relax at all, or stop shaking. Once I got in I felt a million times better. I stopped shaking, and I felt great in between contractions. Then a contraction would come & it was still really intense, but I could rest in between them and that made an enormous difference. I’d labored in a bathtub with both of my other births, but the water birth tub was so much nicer – I could change position to whatever felt most comfortable, and lean on the soft sides. I highly recommend it (this is the tub I used.) 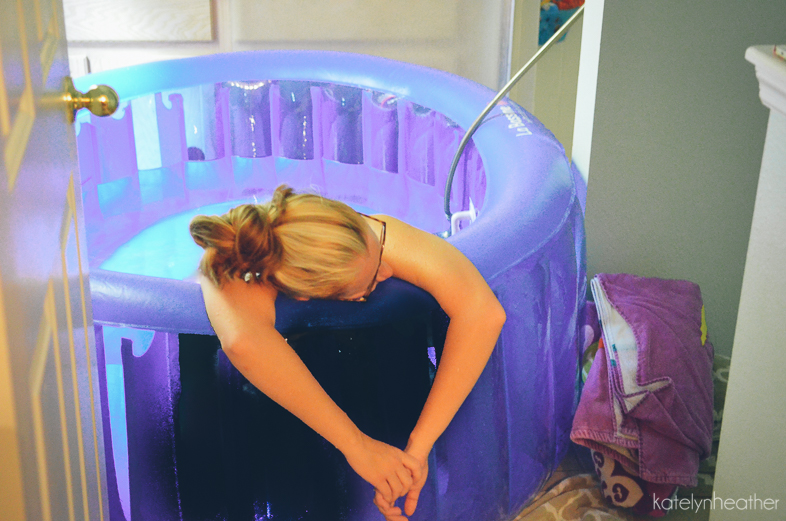 My water broke sometime while I was in the tub, but I didn’t really notice, except that I heard a little “pop” sound that I think was it.

Clarissa got to the house sometime around then. I felt a little bad for her listening to me in the final stages of labor, thinking at the time that she is never going to want to have kids after this (but really I’m pretty sure she was fine.)

I had started listening to my “birth” playlist when I got upstairs, and kept it on while in the tub. I’d never had music on while in labor before, but it was nice, I think it helped me relax more and gave my mind something to focus on besides everything that was going on. 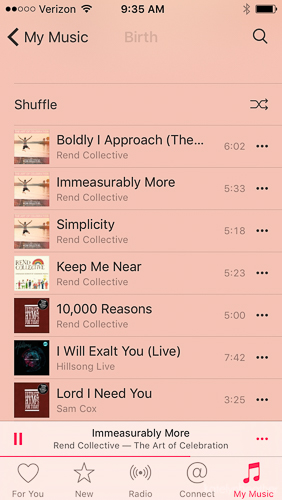 Landon was timing the contractions and noticed that they were getting consistently closer, 4 minutes apart, then 3 minutes. He called Charlie at 11:06 and she said she was about 10 minutes away, to call back if I started to push. Three minutes later I told him “I’m pushing! I’m not trying to, but it’s just doing it.” so he called Charlie and told her, and she stayed on speaker phone with us until she got to our house at 11:14. 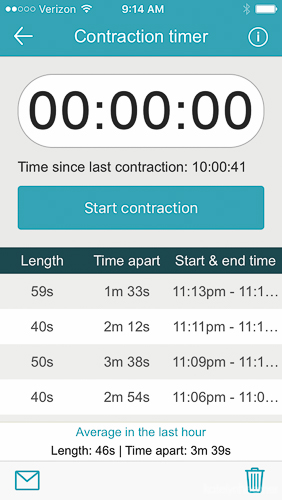 The pushing contractions were so intense, I can’t even. I’m so glad I was in the water for the whole thing, I really don’t know how I would have been able to cope without it.

At 11:19 our baby was born. I think I pushed maybe 8 times total. He was born with his hand up by his face (just like Alia was), which Charlie said is why I had such bad back labor.

Once baby’s head was out I really just wanted to be finished so I asked Charlie “can I push the rest out?” and she asked “are you having a contraction yet?” to which I said “no, I just really want him out” and she told me to wait for the next contraction, which came like 5 seconds later.

Once baby was out I picked him up and held him. He was very slippery in the water, and warm and snuggly and perfect. As soon as I saw his face I knew he was a boy. And even during the last stages of labor everything I said about baby was about “he” or “his head”, so maybe somewhere in me I knew we were having a boy, although in my mind I didn’t know it. But once I did know for sure, I told everyone “it’s a boy!” which was fun and exciting to finally know for sure.

We stayed in the water for a little bit, and Charlie listened to his lungs & told me to rub baby’s back, which helped him breathe regularly.

At some point I moved from the tub to the bed. I held Leo for a long time, and then later Charlie did his newborn exam and weighed and measured him. Once he was born she said she thought he looked about 9 lbs. 2 oz., and he weighed in at 9 lbs. 3 oz. – my biggest baby yet! (I hope to not beat that record – why do I have such big babies?!!) 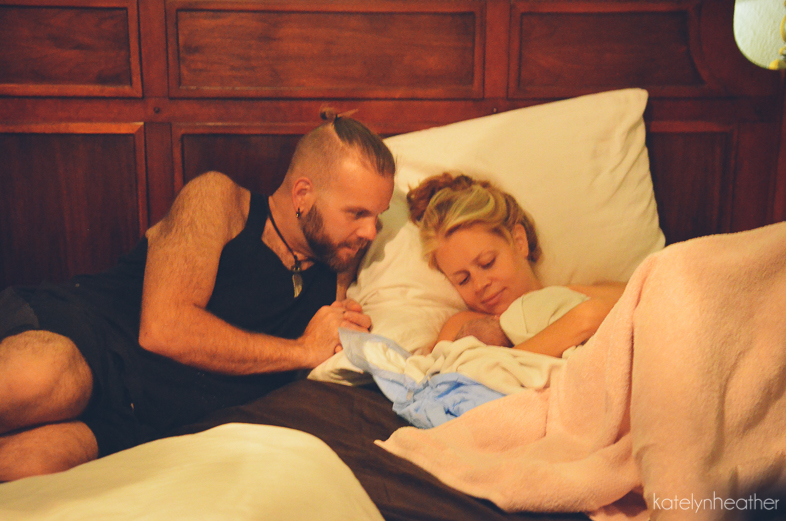 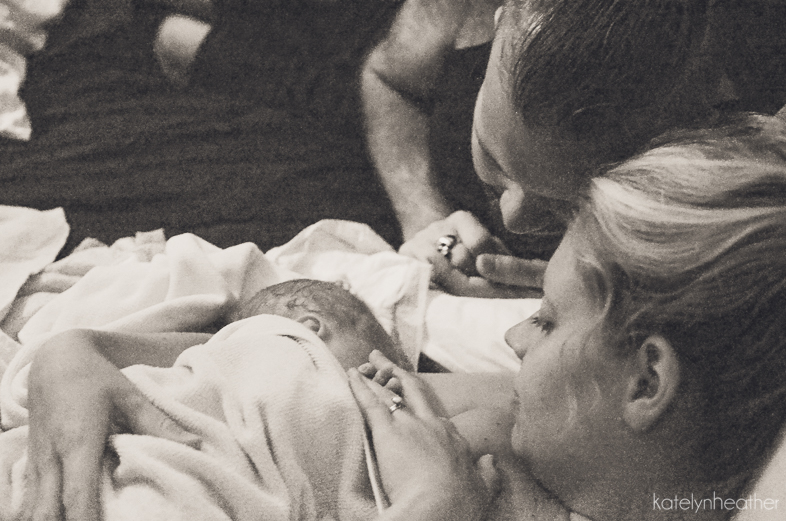 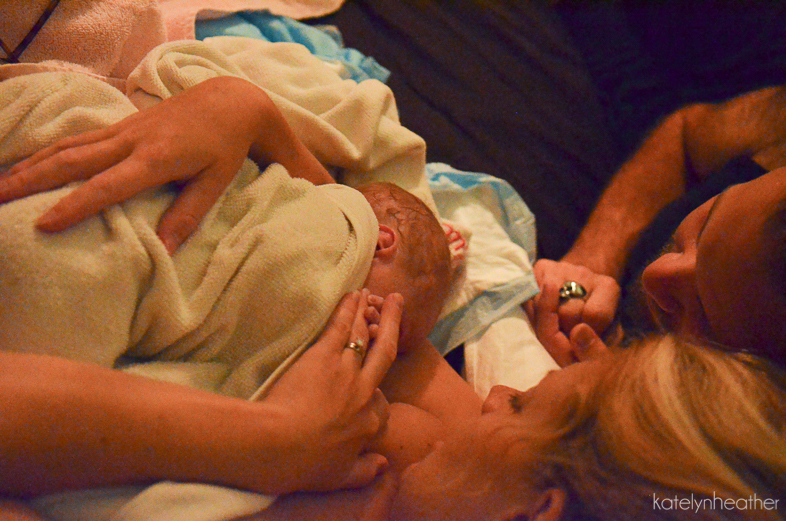 Charlie had her assistant give me a shot of pitocin in my leg because they said I bled a good amount before the placenta detached & I’d be bleeding more afterwards, so they like to be precautious rather than deal with hemorrhage. I could appreciate that, I’d rather be precautious too.

Right away we saw that Leo had blond/maybe a little reddish hair, and I didn’t notice until the next day when the lighting was better, dark blue eyes. 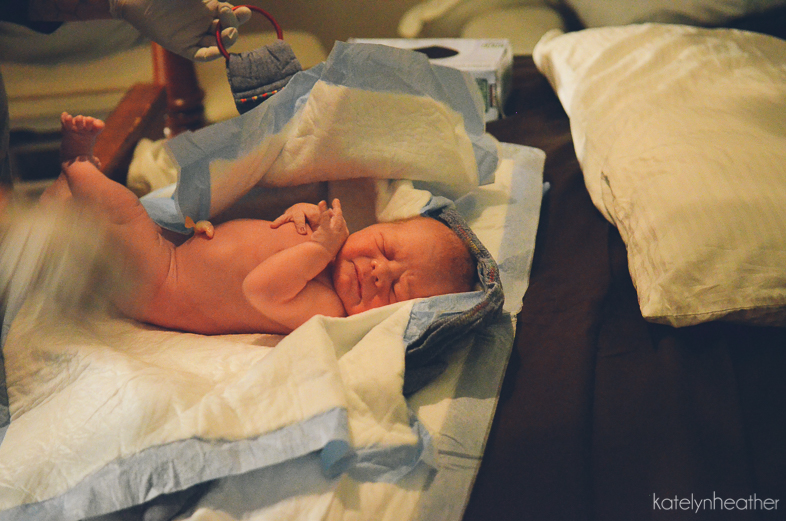 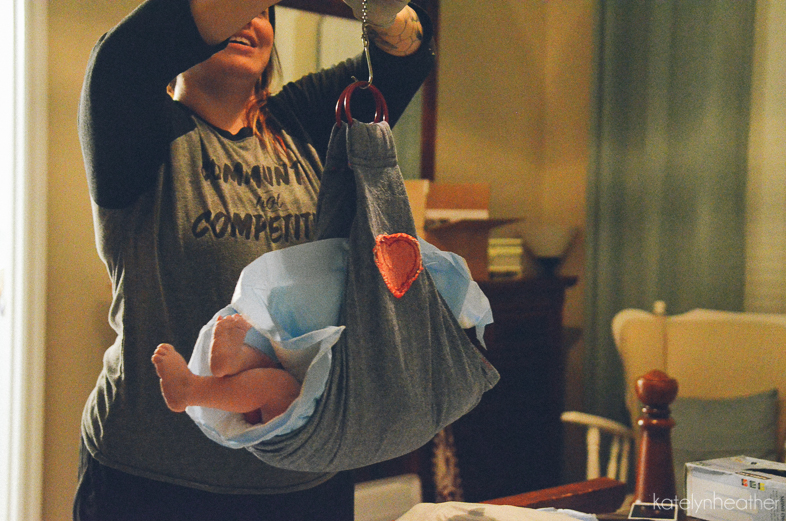 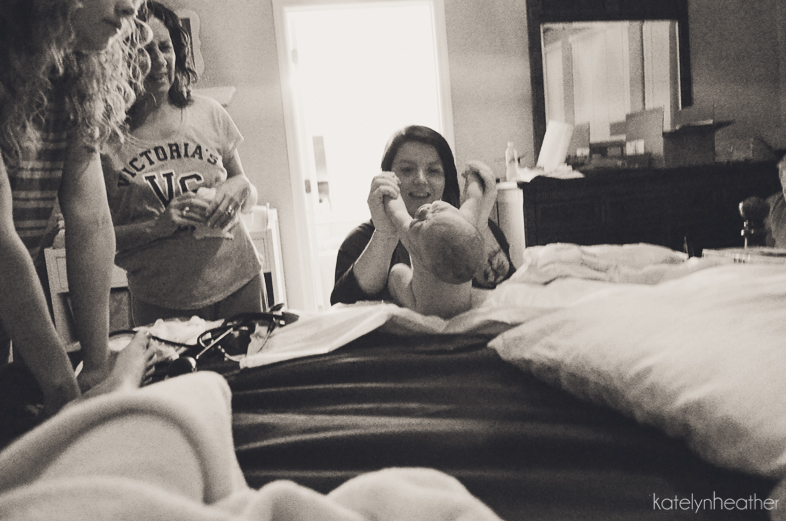 They had me eat and drink and helped me take a shower before they left, and we went to bed around 2 am. I don’t know when I finally fell asleep, but it took a few hours – I just laid next to Leo looking at him and thinking about everything we’d just done & how happy I was he was here. Adrenaline high maybe?

Kaden and Alia met him the next morning – Kaden came into our room around 7:00 & I told him “this is your baby brother.” He was so excited and said “brother?” in his sweet little morning voice, with a big smile on his sleepy face, and scrambled up onto the bed to see and snuggle Leo. 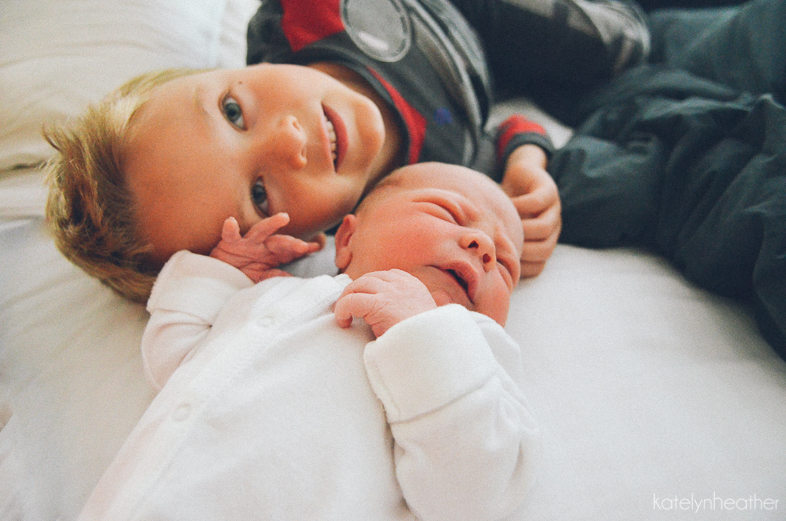 Alia came in a minute later – she had been looking out the window in the kids room when Mimi asked her if she wanted to come see the baby. Alia said “the baby is born already?” and hurried to the bedroom to see. She was so smiley and happy and wanted to touch and kiss and snuggle him. She mentioned a few times over the next couple days that she’d been hoping for a sister, but followed up with “but we will love him no matter what” and we all do 🙂 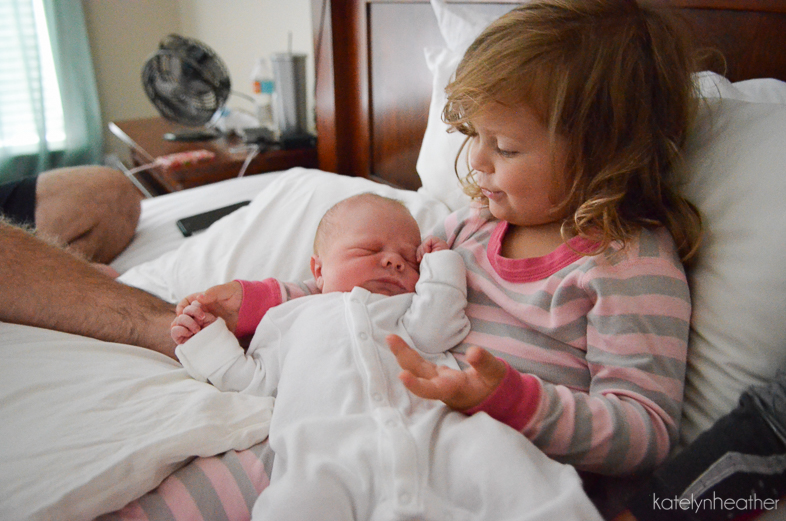 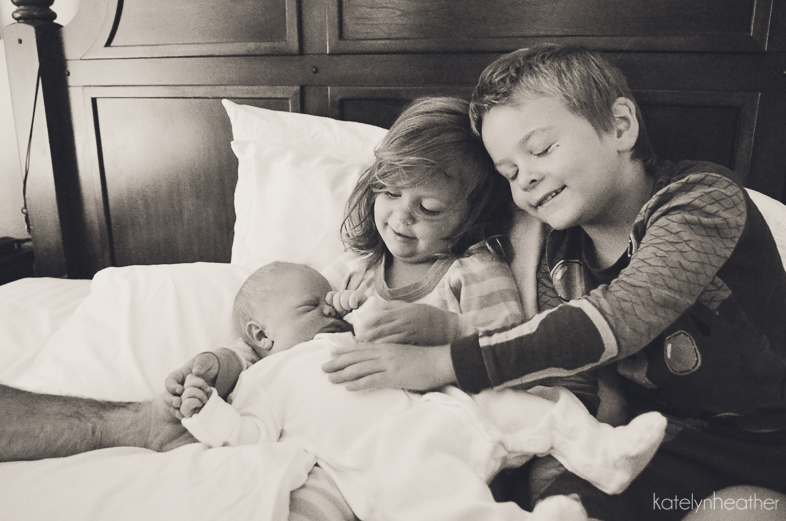 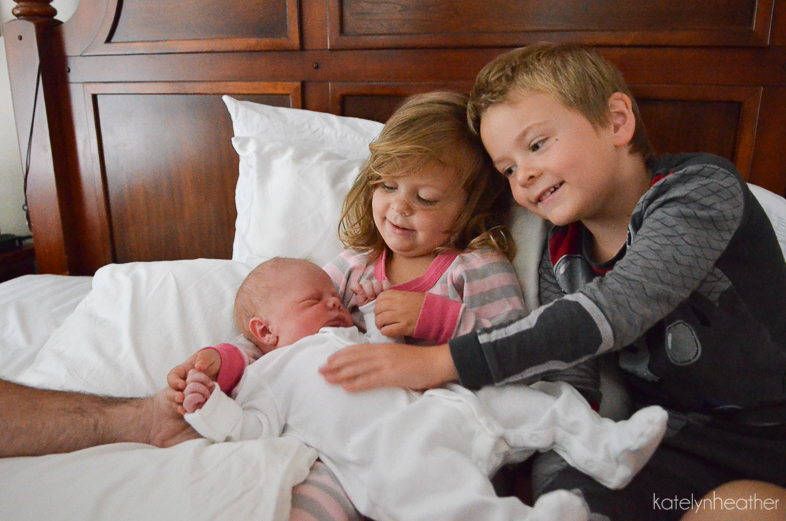