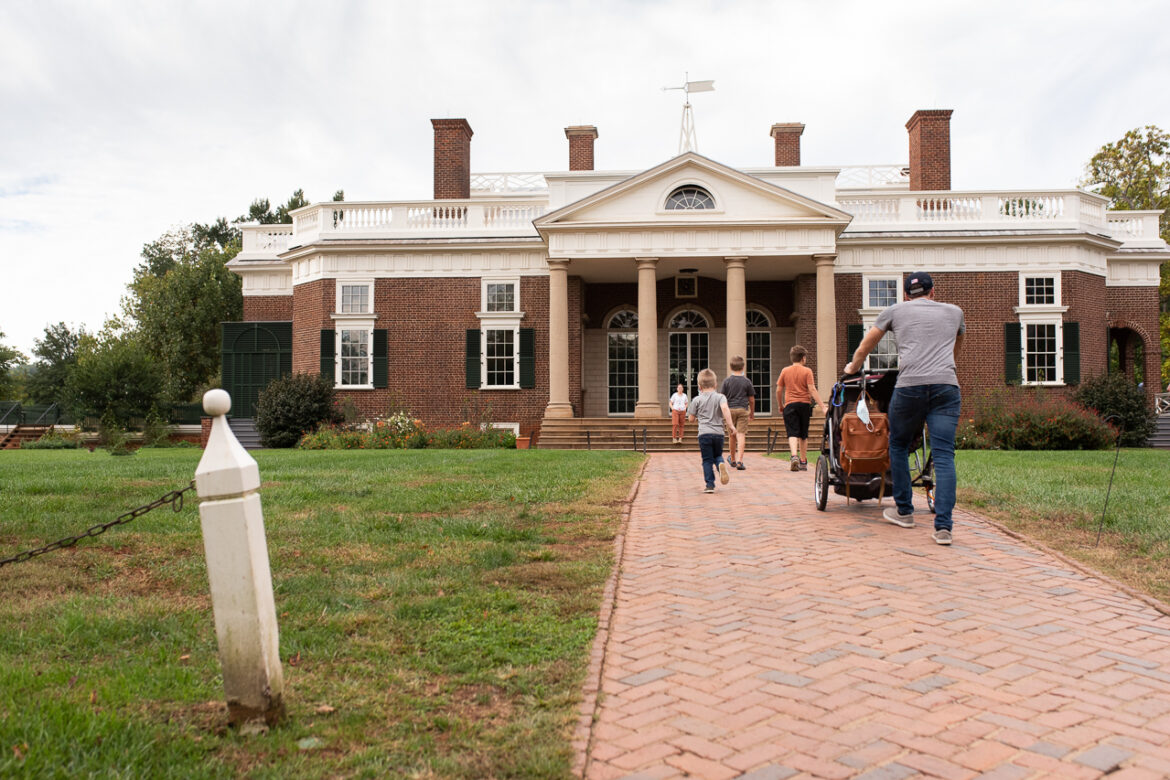 We had another fun and full day today.

First stop after leaving the campground this morning was Monticello. The kids and I have read quite a few books about Thomas Jefferson over the past year, so I was really excited to see his home! Actually, one of his biographies (from the Childhood of Famous Americans series) is where we first heard of Natural Bridge and ended up going there as well.

Monticello is Italian for “little mountain”, and he designed his home to be built atop his favorite childhood little mountain, on land he had inherited from his father (who passed away when he was 14.)

To the right of the large house is a tiny house where he lived as a bachelor, and for a few years with his wife when they were first married while the main house was built.

The main house was really unique and lovely. Some parts of it reminded me of the governor’s palace in Williamsburg, although not as large, and more homey and personal.

The entryway had interesting things he collected and displayed, like Mastodon bones sent to him by Lewis and Clark on their expedition (he was President during that time, and was the one who commissioned their journey), Native American artifacts, busts of influential people, which I was surprised to see included Alexander Hamilton since they were political rivals. I asked a guide about it and he said Jefferson added that one after Hamilton was killed. I thought that made more sense, I suppose it’s easier to like someone when they’re dead.

The whole house was connected in a circular fashion, you walked from one room into another until you came back to the one you began in. I think there was a hall connecting to get to rooms more directly, I’m sure he didn’t have guests walking through his bedroom, but I didn’t notice specifically.

One thing that stood out to me was the bold use of color in different rooms. His dining room was an extremely vivid yellow. Another room was a really pretty blue. Everything was beautiful, and also very purposeful. You can see his brilliant mind through the design of his home and possessions there.

The bold colors made me think that our home could use a little more color than the neutral it came with. I’ve been contemplating painting our bedroom a forest or jade green for awhile, maybe we’ll try it. The kids rooms could use some nice color too.

The grounds around Monticello were very beautiful. There were so many types of flowers.

We watched an actor give a speech as Thomas Jefferson at 11:00. He did a very good job, I enjoyed it. He kept stressing how this country was founded by the people, for the people, and that we’re never more than one generation away from tyranny. He also talked about the importance of unity, how the American revolution was only possible because the 13 colonies unified against Britain, and that Britain had hoped to keep them focused on their differences to better enable them to maintain their tyrannical rule.

There was a lot more to see on the grounds of the house that I’d like to check out next time. Some of the kids wanted to go upstairs in the house too, but that’s part of the 90 minute guided tour. I’d enjoy doing that someday as well, with older kids who want to. Leo and Kjersti didn’t even make it through the self-guided house tour, but I don’t think Landon minded leaving with them.

We stopped in the gift shop before we left and Kaden got a Lego model of Monticello, Alia got a pretty pair of earrings, and I got us a Christmas ornament and apple butter. They were selling seeds from Monticello for your garden, and small plants, which looked really neat too, but the kids were beyond spent so we had to go.

We had lunch at a historic tavern, it was ok. But we got seated right away and it was buffet so we didn’t have to wait for food with tired hungry cranky kids, so praise the Lord for that.

Then we went to Chiles Orchard to pick apples. I knew we were pushing our limit without naps, and Leo and Kjersti fell asleep on the way, but they ended up waking up while we were there so they got to pick apples too.

I wore Kjersti in the baby carrier, and she kept saying “apple orchard!” while we were there, like she thought “apple orchard” meant “apple picking” 😄

She picked one Granny Smith apple and ate it while we walked and picked the rest. We got a half bushel box of them.

The orchard was in a valley surrounded by mountains, so it was really pretty. The weather was beautiful too, until the end when the sun was really intense and hot, but overall it was a very nice day.

After picking we bought apple cider slushees in the shop because we were so hot, and the apple cider donuts everyone told us we had to get, and some specialty popcorn, and a pie pumpkin Alia wanted. Besides the prices being way too high, it was all good. We sat in their shaded pavilion with the Myers and everyone enjoyed their snacks.

I’m relieved that all of the big plans of our trips are complete, all went well, and now we just get to enjoy our visit here for a few days, and go home!